"Where are you from?" she asks. 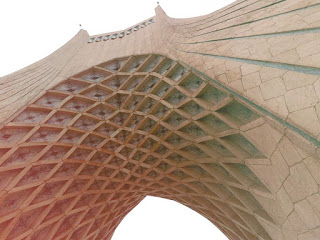 It's been a while since I've been asked that question so it really did catch me off guard. I wasn't being intentionally snarky. For once. So after we go through the dance of clarifying that what she means to ask is my ethnic and cultural background, I give the answer I always give:

"I'm Persian. My family is from Iran."

I think she didn't hear the second part. "Oh honey," she responds, "Come on... Persian... This isn't LA - no one falls for that shit. IRANIAN. You're IRANIAN."

I found myself immediately feeling incredibly sorry for the dude that was hanging out with her.

San Diego has been home most of my life. I was born here and moved back to Iran for a short stint as a small child. In 1989ish we re-immigrated to the United States. Growing up speaking little-to-no English in east county, we often fielded the question, "where are you from," which I guess sounds more polite than saying "what are you."

Most Iranian-Americans I knew back then would say Persian. The topic of how to answer this question was a common one among the tiny Iranian-American community back then. A girl I knew would say, "well... Persian makes people think of empire and cats. Iranian makes them think of mullahs."

My mother disagreed. "We should never hide who we are," she would remind me, "we should be proud." And I mean of, like, everything. If you're familiar with the overly-proud of everything dad in My Big Fat Greek Wedding you have a frame of reference of what Iranians of my mother's generation are like. "You now Iran invented math!"

So in my upbringing, I was taught to respond with "Iranian" when asked. After we clarified what they meant by "where are you from" in broken English, of course. This response did illicit a very welcome dialogue as it encouraged the inquirer to ask more questions rather than making assumptions, even if said dialogue most often revolved around clarifying that we're not simply mis-pronouncing Iraq.

I don't remember when I adopted my current response. But it's probably the most accurate to say that I am Persian and my family is from Iran.

Here's a super half-assed history lesson I kinda see in my head as summed up by Sandra Mackey in her book, The Iranians. The area where Iran and the ancient Persian empire sat was referred to Iran-zameen, which translates to the Land of Iran. Various tribes battled for control of this clump of Earth and the Persian tribe edged ahead because they were good at firing arrows while riding horses; the ancient equivalent of a B-52 stealth bomber, I suppose. Guided by one of history's first known monotheistic religions, this tribe develops a society that becomes the world's first superpower and paves the way for the first universal declaration of human rights. Then a whole bunch of other stuff happens. Cue someone commenting on this post with "well actually..."

Empires rise and fall and the world moves on to develop more advanced trade routes and communication technology but can't seem to agree on what to call the little country. Some called it Persia and others Iran. In 1935, Reza Shah Pahlavi (the Shah-you-know's father) decrees that the official name of the country is Iran. He wanted all citizens to see themselves as children of the same motherland regardless of ethnic or tribal lineage. Then his son kinda backed down on that as he did with a lot of things. And then a whole bunch of other debates arise from various Iranian intellectuals around the world; you don't even want to start going that rabbit hole. If there is one thing Iranians are good at is endless but extremely polite debating.

Today, the official name of the country is the Islamic Republic of Iran. The most recent stats from the CIA World Factbook are from 2011 (I think) and the ethnic breakdown for Iran is as follows:

I tried explaining all this to the lady at the bar but she'd already moved on to The Real Housewives or some shit.
Posted by (mr)Arash at 5:19 PM