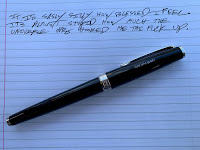 The perfect physical gift, in my opinion, is a thing you'd use the shit out of but one you might've yet to muster the guts to go out and buy on your own.

Last year, for my birthday, Navjeet, John, Tori, Ashley and Jamahl chipped in to get me this classy AF Montblanc pen. Nav did exactly what I'd always daydreamed and wished my family would do: Really pay attention to what moves me and join forces to get me a thing I'd never go out and get on my own. I'd imagine my mom and dad and cousins tossing in a few bucks each to get me a camera, for example. Like "hey dude, you're talented and we believe in you. Stop wasting your time at a cubicle selling insurance and go make art." (Yeah I used to work in insurance.)

It's not the idea of the thing that moved me. I don't care much for things. I have like three or four items I'd maybe want to save if my apartment caught on fire and even those I could easily replace. People drive me. Individuals, coming together to work towards a greater purpose.

I might be the only person in my extended family who gets along with every other family member. Most of my clan is on varying levels of not communicating with each other. Factors include the passage of time between interactions, geographic limitations and just classic ole' bullshit family drama.

I am just seriously loving my life and have no desire to leave this world any earlier than I absolutely have to. But I also don't fear death. When I speak of spirit and source, I'm not just talking out of my ass. I really do have faith that we are connected to a greater consciousness and that the end of this life is not the end of existence. If I did have to leave Earth early though, the last thing you'd see on my face would be a knowing smile. Because my last conscious thought would be that my funeral would bring out all my family who didn't get along with each other while I was still around.

Unless I got killed by a shark. Then I imagine it would be a lot of gargled screaming and I'd probably soil myself. I don't think I'd go out like a hero if a shark ate me. That shit sounds horrible. Did you know sharks can move both their lower and upper jaws? That's some terrifying bullshit right there.

The life of the artist can be one of crippling insecurity coupled with delusional confidence in the insane idea that there are people out there who actually give enough shits to consume things you've created which, by the way, can often dance on varying levels of narcism in nature. Stories that are often regurgitations of one's own personal demons or images which are totally subjective to one's own world views. Arting is hard-ish. And most cultures generally have a love/hate relationship with artists. Once you're on TV and making lots of money, people will support. But many out there don't really want to see how the sausage is made. The years of fine-tuning one's craft. The falling on one's face over and over till something clicks. Finding one's creative voice. That shit takes time because prodigies are far in between.

Everyone in my family has done the best they can with what tools they've had at their disposal. When I was little, my brother used to bring me extra paper from his office at the City of San Diego so I would have a limitless supply of sketch paper to draw on. So I could keep drawing that damn Ninja Turtle till it started to look less and less like an egg with teeth. I have multiple sketchbooks laying around which my cousin Shabnam has given me over the years. And I can confidently credit a couple of books my cousin Kourosh gave me as having a powerful impact on my journey. Little pieces of energetic support from multiple people can be found in my belongings.

But I'd always also dreamed about how magical it would be if really 'seeing' me and what I was trying to do was a thing that brought my family together, even if for a few moments. Partly so I could feel some more support on this uphill journey I've been on for so long. But primarily, I think I daydreamed about my family getting together and buying me something because I wanted to see my extended family be together. To get along.

I tend not to have 'nice things' for fear of losing or damaging them, always seeking detachment of material things via my dime-store Buddhism. So when I received this amazing pen, my first feeling was mild panic. So I hid it away. I told myself I'd begin using it when I get my own office. And only then for special situations like signing important documents. I played with it a couple of times and carefully placed it in a safe space.

A couple of days ago, Tori asked me if I use the pen that Nav was so insistent they get me. That's when I realized a year had passed and I'd barely touched it. So I took it out from its hiding spot and began journaling.

Here was this daydream I'd had since I was a lad, that multiple people who loved me would chip in to get me something very personal. Then the dream came true and I still didn't believe. My mind found a way to not accept this reality because it was too good. This was me not seeing the abundance in my life. This was an internalized energy of poverty.

I. Am. WEALTHY. I mean wow! Look at all the love, talent and opportunities in my world. I wonder how many other dreams of mine have come true which I've been refusing to see.

I write all day. I've been writing by hand more in the past months than ever, preferring to mentally work things out analogue before hitting the computer. I spend a great deal of time with myself, untying mental knots and assessing the next steps in multiple projects. A good pen is a damn accurate gift.

I received a pen last year for my birthday but it took a whole year for me to truly accept the gift. I sure hope I don't lose it like I lose every damn pair of sunglasses I've ever owned... But if I do, I can now see that the true gift was not the physical thing, but the passing of the energy that it represents.

You know the best part about this post? I know that Nav got a notification that he's been tagged on a post and then saw that it was one of the novels I periodically write. I imagine he's looking at his phone and mouthing the phrase "oh my god, are you fucking kidding me? I'm not reading all this shit, you asshole!" And I'm absolutely laughing as I write this last bit, considering the possibility that the visual is an even better gift than the pen.

This year I think I was handed more gifts than I'd ever been handed before on a single birthday weekend. As if having opened up to the abundance which exists in the universe really manifested into my physical reality. I am so grateful for my family and my friends. Every one of you is an angel, sharing in this journey and guiding me/us towards that place in the light. And sharing this story is my public commitment to truly see all the wealth and abundance all around me.
Posted by (mr)Arash at 4:02 PM